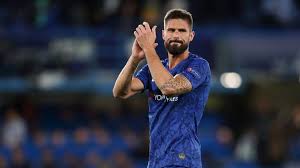 The French International Footballer, Olivier Giroud, has made a premier league history with Chelsea as the Blues finished in top this season after defeating Wolverhampton yesterday. Giroud joined the Blues from Arsenal in January 2018. He signed an 18-month contract with Chelsea. Olivier Giroud arrived at the Bridge with a proven pedigree having scored many goals regularly in the premier league, in Europe and also won the World Cup with France.

The world cup winner started his noble football career with Grenoble and later moved up through the ranks. He made his appearance for France football club in 2006. The versatile striker who is 33 years now has shown that there’s plenty of life left in him. Currently he is one of the most experienced premier league strikers. Giroud is currently the oldest in the premier league history to score in five premier league starts in a row taking it from Vardy who is 32.

Olivier Giroud’s goal against Wolves yesterday made the 100th goal for Chelsea in all competitions this season and the Blues had a clean sheet with it.

Wolverhampton were making it difficult for the Blues yesterday as they had in last season until Eden Hazard’s magic became the difference right at the end to earn a draw. The same result yesterday would have done Chelsea good in any way. It was Hazard’s individual quality that broke the spines of Wolverhampton last season. But this time, from Mason Mount who scored a beautiful free kick. Mount had his 50th Chelsea game in mid week against Liverpool. The youngster has 8 goals and 5 assists to his name.