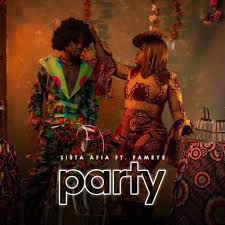 Award-winning musician and song writer Sis Afia releases a video for the music ‘Party‘ which she featured Fameye.

Sister Afia did not only employ contemporary highlife in the song but also revived the old school vibes even in the music video which was recorded mostly in black and white.

The official music video which ‘Party’ which featured fameye was produced by WillisBeatz. Sister Afia and Fameye’s fans are already loving the potential street banger.

“this is a different side of the slay queen sister Afia, beautiful song. I think Fameye also killed it…”, another wrote