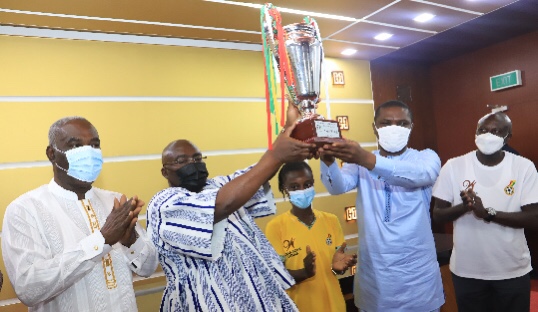 The 2020/2021 women’s Zone B football league with Hasaacas ladies emerging as the winner and also taking away the ultimate price has sparked some rewards to them as Ghanaians are very proud of them. The veep, His Excellency, Dr. Mahammudu Bawumia has appreciated these ones.

The Ghanaian champions however visited the Vice President, Dr.Mahammudu Bawumia on Wednesday at the Jubilee House to present their Zone B Champions League trophy to the Presidency. The Vice President before the competition, donated $10,000 to the Sekondi-based club as a way of supporting them to cater for their expenditure heading to Cote D’Ivoire.

The ‘Hasmal Ladies’ started on a very lower note in the competition, but rekindled a huge revenge against Nigerian giants, Rivers Angels placing them in the final to emerge winners of the CAF Zone B Champions League.

The second gentleman of the land, wrote on Twitter having handed a moderate reception to these vibrant ladies for their triumphant glory and commended them for a good work done on behalf of the President. He wrote; “This afternoon, I welcomed newly-crowned CAF Women’s Champions League Zone B Champions, Hasaacas Ladies to the Jubilee House. The team presented to me the trophy they won in Ivory Coast, which has also qualified them to the final CAF Women’s Champions League in Egypt.”

“On behalf of President, H.S Nana Akufo-Addo, and his government, I congratulate them for their outstanding and historic achievement.”
Hassacas Ladies will now be representing Ghana in the main CAF Women’s Champions League tournament later this year in Egypt.