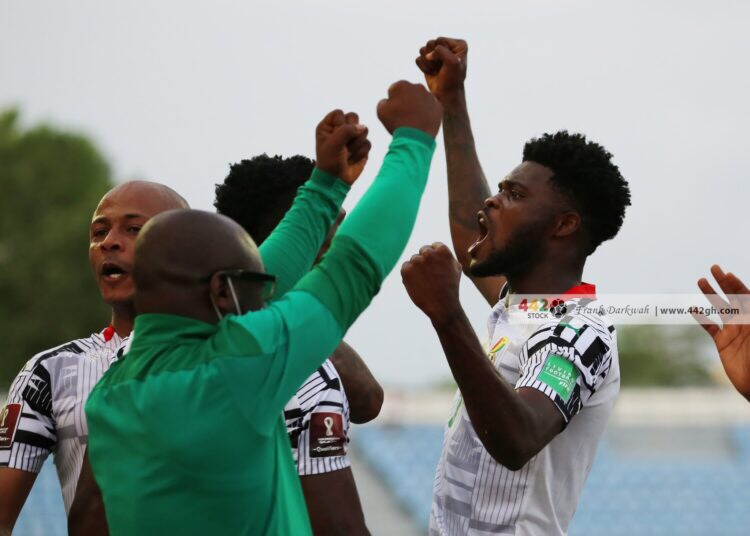 The Black Stars of Ghana came out high in the Qatar 2022 world cup qualifier match against the warriors of Zimbabwe on Saturday, October 9, 2021 at the Cape Coast stadium as they thrash their opponents by 3-1.

The Black star team led by Milovan Rajevac beats Zimbabwe as they attain six points behind South Africa on the match table upon the second return of the Serbian coach. Ghana took maximum possession of the ball as Jordan Ayew lays off a splendid pass to the Ajax Amsterdam young star, Mohammed Kudus who finesses the ball to the bottom left corner of the pole to get the first goal of the match for Ghana within 5 minute of the game.

However, the Zimbabwean captain, Knowledge Musona’s 49 minute goal from the penalty spot pushed Zimbabwe level with Ghana but at the point where Zimbabwe thought they could carry the game, the Arsenal midfielder, Thomas Partey strikes a powerful shot into the opponents net after taking on a number of players in the 66 minute.

Captain Dede Ayew then led by example when he scored the last goal of the game to crown it all up in the dying minutes of the game. It was a good win for Ghanaians who expressed mixed feelings after the game. Ghana will travel to Zimbabwe to play their opponents in a reversed fixture on the 12th October, 2021 and hopes to secure maximum points in that game.